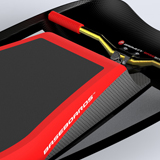 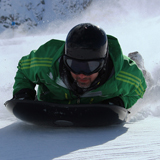 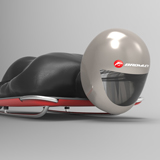 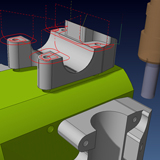 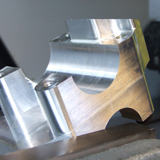 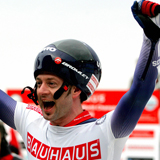 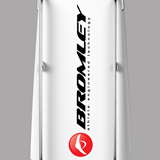 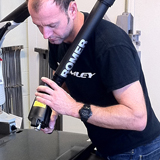 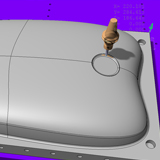 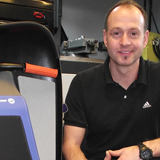 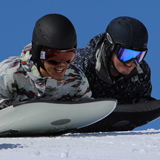 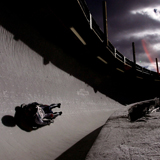 Britain’s number one skeleton racer for the last 20 years says the VISI CAD/CAM applications are vital in keeping the sport’s leading athletes at the top of their game. “We need the world’s best, to help the world’s best.”
When not hurling himself down bob-sled tracks at 90 miles an hour on a small high-tech sled, Kristan Bromley designs and manufacturers sleds for 22 nations preparing for the next Winter Olympics, including Britain, Norway, Russia, Switzerland and Korea.

He has one world championship under his belt, two overall world series titles, numerous British national titles, and is three-times European champion. In 2008 he became the first man in history to win the World Championship, European Championship and World Cup in the same season. The British media nicknamed him Doctor Ice because he gained a PhD from Nottingham University with a thesis entitled "Factors affecting the performance of skeleton bobsleds".
His company, Bromley Sports, ships between 100 and 200 bespoke sleds to athletes around the world, but is currently moving into the recreational arena, having designed and developed a patented sled for an exciting new snow activity, Baseboarding.

“Over the next two to three years we’re changing from purely providing a low volume, highly customisable Olympic-governed sled, to manufacturing up to 10,000 Baseboards for a mass market. Our mission is to become the most advanced sliding sport product manufacturer in the world.”

And he says VISI, from Vero Software, is a critical aspect of the company’s future. “It’s absolutely vital for creating both high precision performance parts, and carbon fibre lay-up tooling.”

Baseboarding has recently been introduced at the Whistler Olympic Park in Canada, and Kristan Bromley describes it as “bodyboarding on snow” sliding down a groomed run on a patented board providing optimal ride dynamics, keeping the rider close to the snow, with a low centre of gravity. “The Baseboard has a low friction curved base and parallel runners which create a highly agile board with easy-to-learn steering using feet and subtle upper body movements. It’s a safe recreational way for families visiting snow resorts to experience the head-first ride position of skeleton racing – which is an amazing adrenalin rush.”

Although the Baseboard is extremely light, it is strong and stylised. “The product is underpinned with thermo-plastic composites, creating a super-tough 3D structure that can withstand temperatures of minus-30 degrees centigrade.”

But Bromley Sports made its name in the highly competitive world of skeleton racing. “We’re giving athletes the tools to fight for Olympic medals, and VISI is absolutely pivotal in creating maximum-performing sleds by pushing boundaries to improve performance. Reducing aerodynamic drag by five per cent can cut an athlete’s time by one, two, or even three tenths of a second, and that’s enough to take them from tenth place right through to Gold.”

With more than 60 carbon fibre and stainless steel components in the skeleton sled, and the prospect of mass producing Baseboards, he says it was important to bring the whole operation in-house. Previously, most of the tooling work was sent to sub-contractors, but he realised that by bringing tool design and manufacturing in-house they could create new designs, develop products faster, and innovate more efficiently.

To achieve that, they invested in a Doosan DNM 650 VMC, retro-fitted with a Nikken fourth axis rotary table, driven using VISI’s multi-axis machining capability, meaning they can develop complex tooling as well as machining prismatic style components. “The VISI team were instrumental in explaining how the software works and getting us up and running with our machining centre. The engineers’ machining knowledge was invaluable, and without their support we wouldn’t have been able to get our products out there so quickly, helping athletes win medals in the World Cup.”

The company, which was established by Kristan and his brother Richard in 2000, now use VISI for every component in their skeleton sleds and Baseboards. “And it’s not just the components that go into making up the products. We develop everything that supports the manufacturing process in VISI as well – the tooling and jigs.”

Rules for the skeleton sled are set by the Fédération Internationale de Bobsleigh et de Tobogganing (FIBT), the sport’s international governing body, but allow for the use of a variety of materials to come together to make a high performing product. “Technology is one of the key parts of an athlete’s performance. In the same way that a Formula 1 driver can’t win the world championship without the best car, a skeleton racer would really struggle to win Olympic medals and world titles without the best sled technology.”
The development process includes ensuring that the sled is tailored to an individual athlete’s body. “We design it around the athlete’s own ergonomics, reflecting the pressure points of their shoulders and knees.” Bromley Sports use Hexagon Metrology’s ROMER Absolute Arm with integrated laser scanner to reverse engineer the athlete’s form. “We scan an athlete’s body shape and generate accurate mesh data for Computational Fluid Dynamics analysis in less than an hour.”

Once the design is completed in Creo, he seamlessly drops the file into VISI and starts to work on machining strategies. “Although VISI is extremely powerful and flexible, it’s also simple to use. When we’re machining new tooling for the carbon fibre composites, being able to approach that particular tool with different machining strategies, and having the ability to manipulate those cuttings paths, is critical. To achieve the precision we need to help athletes win medals, we’ve found we can’t hit a tool with a “one toolpath suits all” approach. We need to tailor those toolpaths and the cutting strategy in order to reduce machining time and produce a part with a high level of surface finish that requires minimal hand polishing.”
And he says VISI’s simulation capability ensures they have the mould and toolpaths ready for perfect, accurate and collision-free machining before they start to cut metal.
Defining Bromley Sports’ association with VISI, he says the software means they can build sleds with greater precision and to the required tolerances. “Gaining performance is all in the detail, and as an organisation trying to help athletes win Olympic medals we need the world’s best, to help the world’s best.”

“We’re giving athletes the tools to fight for Olympic medals, and VISI is absolutely pivotal in creating maximum-performing sleds by pushing boundaries to improve performance.”